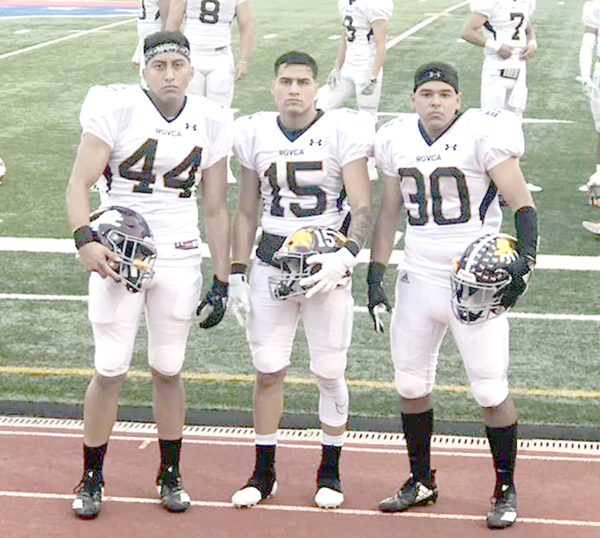 Although the game was a lopsided affair with the West winning 45-14, the three La Feria seniors went out with a bang with timely action played out on the turf.

Darius Hernandez, who was named the District 16-4A Division 1 Co-Offensive Player of the Year, will be the only senior graduating and playing football at the college level. Hernandez signed a letter of intent to play at Clarke University in Dubuque, Iowa. He said his last high school game was a blessing.

“It was an honor,” Hernandez said, “and I want to thank the (Brownsville) Hanna coaching staff for picking all three of us and bringing us out here just to meet new people, new coaching staff, and learn new plays.”

On the other side of the ball, linebacker Jacob Garza, who was selected as the district Defensive Player of the Year, said his favorite memory playing high school football was indeed the moment the Lions defeated the Needville Blue Jays in the area round.

“After winning round two, the atmosphere of the school and the community was great,” Garza said. “I’ll never forget that.”

Aja Hernandez, unanimous first-team linebacker and recent honoree to the Dave Campbell’s Texas Football Whataburger Super Team, agreed with Garza and said everyone was “hyped up” for going to the third round of the playoffs.

“When we went three rounds deep, it was a good time,” Aja Hernandez said. “Our team was hyped up too. Once you go that deep and once you know you have that relationship that we all had, it’s the best feeling in the world.”

In light of it being his last high school football game and reflecting a senior’s mindset, Darius Hernandez said it was great coming out to make memories.

“To play our heart out, regardless of the score,” Hernandez said, “we all had fun tonight, and that’s all that matters.”