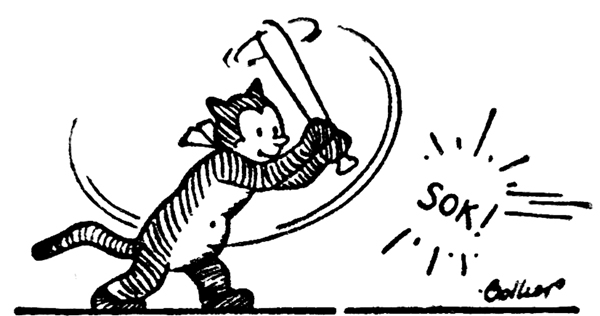 Shrdlu our office cat has been absent from work this week because he is tired. Now Shrdlu is a pretty husky fellow, but a trip over the week end to Monterrey was too much for him. Shrdlu is accustomed to good ol’ U.S. currency which sometimes he spends too much of, but when he got down to Monterrey he exchanged all his American cash for some Mexican pesos.

As a result, he spent his whole weekend vacation pulling at a bag of pesos bigger than himself. One American dollar’s worth of paper pesos was enough to weigh down an ordinary cat. But Shrdlu is one of those fellows with a Western flare who likes to hear his wealth jingle. So he got all of his week’s salary cashed into centavos – all two dollars of it. As a result, there was enough metal to build a locomotive – almost.

Seventeen hundred big, round coppery centavos. But Shrdlu’s brief jaunt into ecstatic contact with all the money he could carry ended when he paid for his breakfast. The waiter took one half the bagful of centavos for that one meal.

Not prone to give up any more of his “big” fortune, Shrdlu spent the rest of the weekend without anything to eat, lugging the 850 centavos with him wherever he went. As a result, he arrived at home very tired and unfit for such things as an office cat has to do.

This installment of Shrdlu our Office Cat ran in the
June 9, 1949 issue of La Feria News.