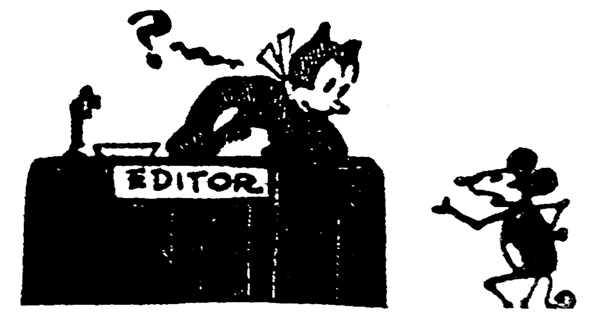 We’re getting scores of requests for the correct pronunciation of the name of our office cat, Shrdlu. It’s a long story, but we’ll try to tell you all about it. In fact, it’s two stories, and you can believe either one of them.

On the linotype machine – that’s the complicated piece o’ machinery that makes the type that makes these words that you’re reading – is a keyboard somewhat like on a typewriter. At the extreme left, in an up-and-down line are the letters: s-h-r-d-l-u. When we needed a name for our cat, we had the linotype operator run his finger downt he left hand column, and we got “Shrdlu.” That’s one story.

When Lou grew up, she was a boy cat. It afforded him much embarrassment to be called Lou. In fact, if he were around this week, he would not permit us to run this article. But he is gone for the week. He’s out chasing varmints out of the bushes on those week-grown lots in La Feria, including our own lots.

One day, a fellow who had indulged too liberally in a bottle of mescal came and wanted his name in the paper. Our office cat glanced up from his duties and snarled: “Don’t pay any attention to him. He’s drunk.”

The intoxicated one peered at our cat and agreed: “You’re a smart kitten. Yep, you’re downright shrewd!”

Since then, our cat has been known as Shrewd Lou, or rolled from the mouth such as a man with too much mescal would roll the words, it’s plain Shrdlu.

This installment of Shrdlu our Office Cat ran in the June 10, 1948 issue of La Feria News.