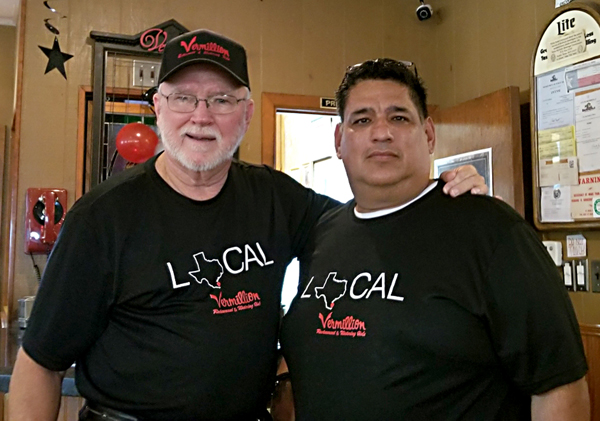 The Rio Grande Valley has hundreds, if not thousands of restaurants.

Some come and go, while others stay around for a while.

In Brownsville, the Vermillion Restaurant & Watering Hole is getting closer to turning 100 years old.

On Tuesday, Aug. 13, the popular hangout celebrated its 85th anniversary and people turned out to congratulate its owners George and Iselle Perez.

The Perez family bought the Vermillion about four years ago and have been running the business ever since offering the same type of food and ambiance the restaurant has been known for.

Perez said he began working at the restaurant 38 years ago at the age of 13.

“I told its owner that one day I will it buy from him,” he said, referring to Dan Davidson. “And here we are today.”

Davidson said he had the Vermillion for 44 years.

“I feel great about it,” he said when asked how he felt about the Perez’s owning the business today. “It’s great for the Vermillion, for the employees and for the customers.”

John and Romie Sosa were among those stopping by during the restaurant’s 85th anniversary.

‘We have been coming here for many, many years,” Sosa said. “We have known the previous and new owners for a while too.”

Romie Sosa said the nachos are a Vermillion trademark, while her husband said he likes the shrimp sandwich.