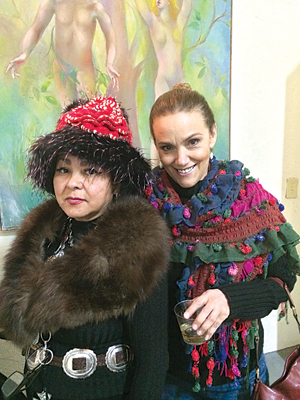 The Spanish word for “mirage” is “espejimo” – a fitting title for the first art exhibition of the new year to grace the walls of the Carlotta K. Petrina Cultural Center in Brownsville, Texas. The reception was held Friday night, January 3rd, from 6 to 9 pm.

The Carlotta K. Petrina Cultural Center is housed within the old Casa Blanca Hotel, a historical heritage site built in 1900 for local merchant M.H. Cross in the heart of historical downtown Brownsville and walking distance from the Mexican border crossing. The building has been many things over the years before becoming the residence of international ly known artist Carlotta Kirby Petrina until her death in 1997. 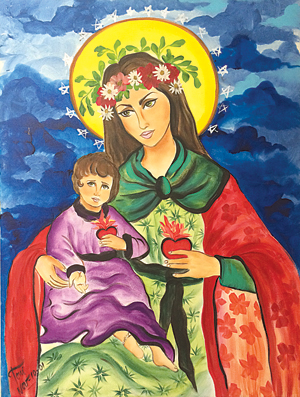 Since then, her estate has converted the residence into a cultural center that exists to preserve culture, the fine arts, and music and provide opportunities for the community to experience them. This includes providing music and art lessons free of charge on site as well as providing wall space for art exhibitions. The Cultural Center is under the care of UT Brownsville’s Tepeyac Walk Community & Campus Outreach organization and is maintained strictly by the efforts of volunteers from the University and community.

ESPEJIMOS proved to be an excellent first exhibit of the year for the Cultural Center, showcasing the work of flambouyant, outspoken artist Toni Hudson and reserved, unassuming painter Maria Antonia Rodriguez.

Toni R. Hudson was born in Concordia, Coahuila, Mexico and brought to the United States at the age of 14. During the reception, Hudson recalled how she began painting to help her cope with the pain of divorce in 1995. Initially only painting for her own personal satisfaction it wasn’t until she made her first sale to a collector for a drawing of a Madonna and Child that Toni realized her true calling. 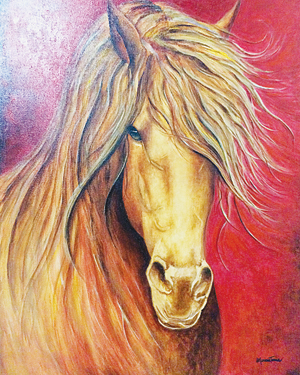 In sharp contrast, Maria Antonia Rodriguez provides the perfect “yin” to Toni’s “yang” – quiet and reflective – a lot like the paintings she produces. Rodriguez prefers to let her work speak for itself and shys away from the spotlight.
Billed as a collection of their best work, the show was a delicate balance between two disparate styles, as well as two completely different personalities.

As visitors enter the show from the lobby, they are immediately greeted by the work of Rodriguez in the first room. Rodriguez’s work is mostly abstract with a pallete consisting predominately of light pastel colors to create a hazy fusion of light and mist that recalls the color combinations used by the Fauves. The stand out works that were most indicative of this approach included “Mirages” and “Subtly Forever”, both playful abstractions that hint at the objects they are meant to represent without any hard lines to delineate their silhouettes. “Subtly Forever” recalls those quiet moments along the shore of the Gulf of Mexico when the sun is about to rise and fog has engulfed the shoreline. 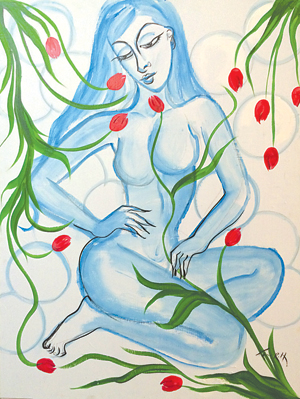 The doorway leading into Hudson’s portion of the show showcases Rodriguez’s most representational piece in the entire show “Divine in Red”. Perhaps a bit out of place in a one-man show, the piece offers a perfect transition from the hazy abstraction of Rodriguez’s work into the room containing Hudson’s playful, cartoonish and brightly colored work.

Toni Hudson’s brightly painted canvases celebrate the female form, femininity, Catholicism and comaraderie of women. Stand out works in this collection included “Sex in the City” a brightly painted canvas featuring three smartly dressed seemingly Latina ladies with a dark idealized city skyline in the background that recalls the skyline of San Antonio with its “space needle” prominently placed beside a cartoon sliver of moon. Another standout was the deceptively simple canvas “Allura Blue”, a stylized blue nude female figure with red flowers that seems to recall the simplicity of form that Picasso experimented with in his Neo Classical period. 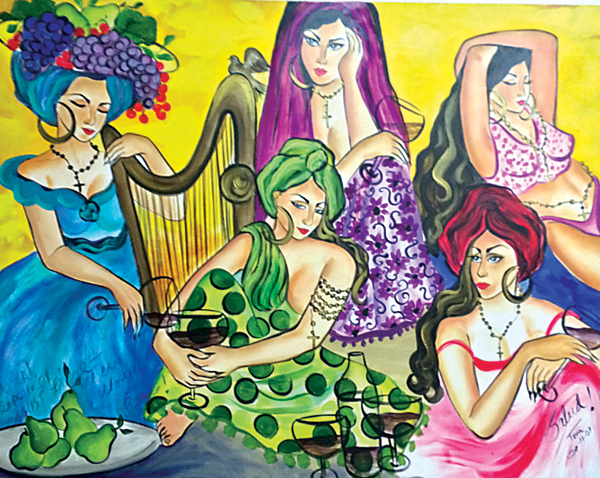 ESPEJIMOS proved to be a slightly symbolic art opening for the Carlotta K. Petrina Cultural Center in that it embodied the spirit of its namesake. Carlotta Petrina was an accomplished and talented artist that most likely would have been proud to see two accomplished, talented artists hanging in her home. 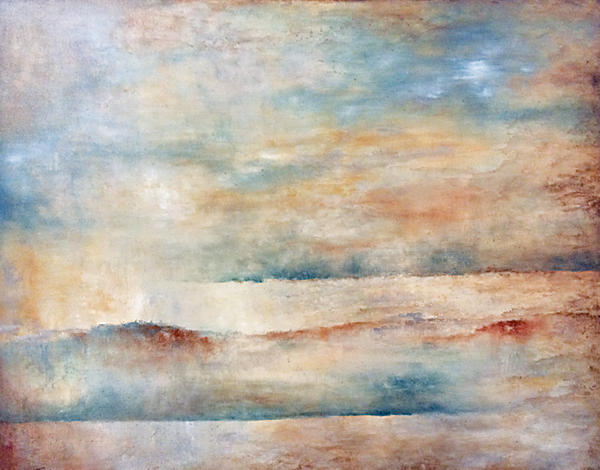 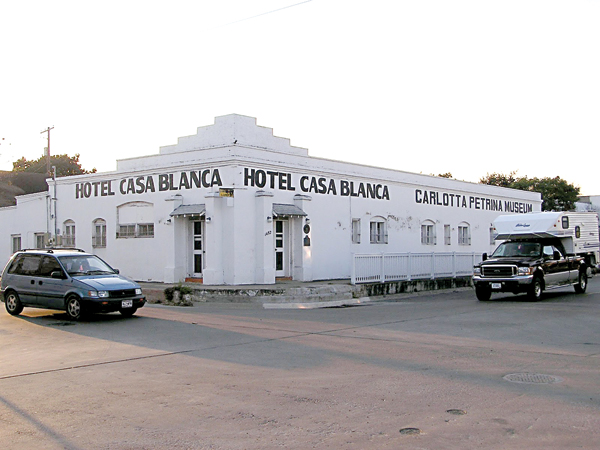